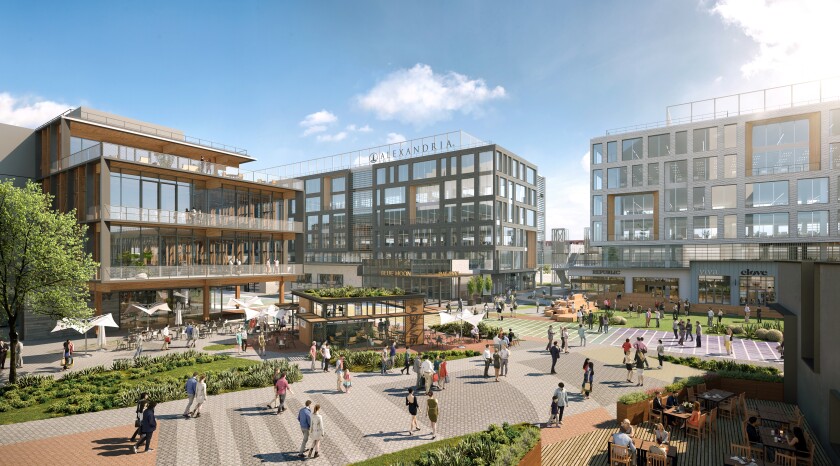 The owner of the Costa Verde shopping center opposite Westfield UTC plans to demolish its 31-year-old strip mall and replace it with something tailored to fit the coming-soon trolley terminus that connects to the property. The revitalization effort, which has been in the works since 2015, aims to merge community retail with a modern, 400,000 square-foot life science campus and a 200-room business hotel.

Sandwiched between La Jolla Village Drive and Nobel Drive at 8560 Genesee Ave., the Costa Verde center, built in 1989, currently offers 178,000 square feet of retail on a 13.9-acre plot, and is perhaps best known for its McDonald’s, Chevron and Bristol Farms. With the redo, Regency and its partner Alexandria, a San Diego-based life science real estate developer, are keeping the fast food joint and the gas station, and maintaining the same square footage of retail. But everything is being refashioned in the style of an urban job center, complete with an event plaza, more restaurant space and additional green space.

“We’ve created what we think is a very dynamic, multi-use center that incorporates all the amenities that office workers want, as well as the neighborhood shopping that the neighbors in that area (need),” Regency executive John Murphy said in an interview with the Union-Tribune. “We have a favorable attitude that once (the pandemic is over) this neighborhood will be one of the most dynamic neighborhoods not only in San Diego…but in the country.”